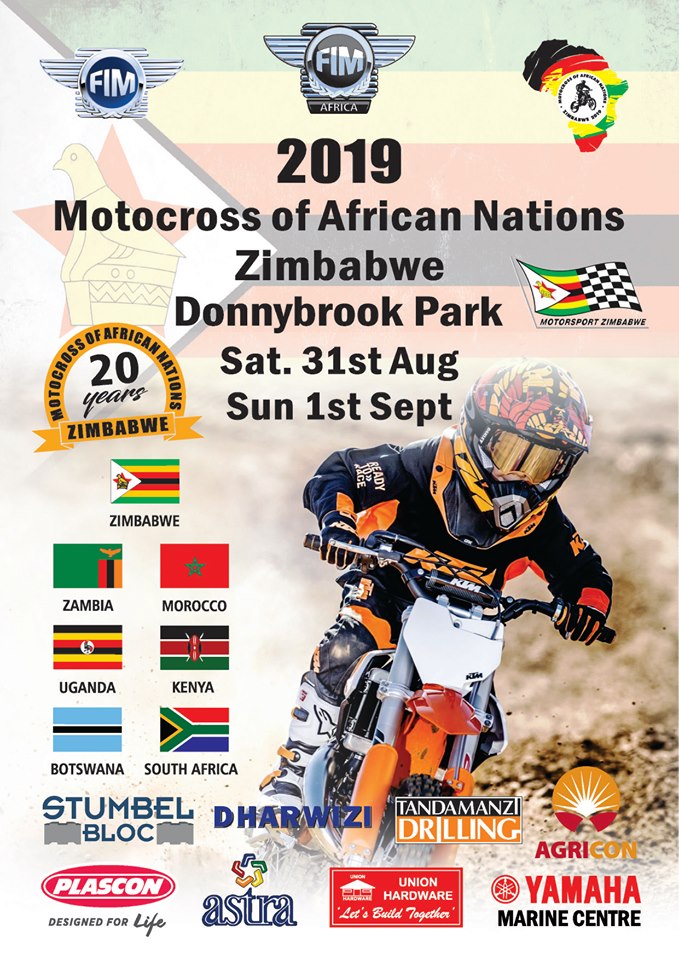 FIM Africa Motocross of African Nations heads to Donnybrook Park in Harare, Zimbabwe, on 30 August to 1 September 2019. Having hosted the event twice in 2011 and 2015; and the home of the African Continents favourite year-end MX event, The Summer Series.

Donnybrook Park and their team behind this year’s event are fired up to get Africa’s best riders back to the Harare based track, for another epic edition of this incredible competition, at what could clearly be the unofficial home of MXoAN.

Track preparation has been ongoing for the last four months and Rick Goby (Zimbabwe Motocross) said that they have gone all out to create an excellent dirt track that even the World’s best would love to battle on.

“Our team has been working under a lot of pressure, understandably, but despite our little challenges here in Zimbabwe, we are not slowing down though, in order to provide a facility that will make the FIM Africa proud of our efforts.”, said Goby and he also assured that all the FIM requirements in lieu of Environmental and the Ride Clean campaign are being adhered to as much as possible.

Speaking of world class riders, the seven nations competing this year, all have just that, some of the best riders in the world, and considering a number of them have already been on international duties at various stages of their careers and even this year as well, the fight for the all-important African Nations title is poised on a the edge of a berm, about to blow out and provide the fans watching, some of the best Motocross action you can find anywhere in the world currently.

South Africa must come into this event as odds on favourites, having won the title the most of all, with only Kenya and Uganda being the only other teams to have taken the title, since 2009. However, with massive improvements in the sport throughout the continent, Zimbabwe and Botswana will also stand a very good chance for the top spot. Particularly Zimbabwe, as the host nation is coming in full force, to attack the rest on their home soil. Then again Uganda, Zambia, Kenya and the smallest team Morocco will be up for the action expected and will certainly push hard for possible class wins, if they are unable to beat the bigger teams for the Nations Title at the end of the 3 day event.

With the majority of the respective national championships being put on hold, in order to give the top riders a chance to compete in this prestigious race meeting, the riders will all be on top of their game in order to get those valuable points towards the outcome. Many of the riders have been to Zimbabwe before, so they will be looking to give their all and then be there to help the rookies from each of their teams and pass on the necessary advantages they might need to get them up to speed and be at the front from the first session. Teamwork is crucial at this event and as seen at the bigger FIM Motocross of Nations, even the weakest rider in your team can actually turn out to be the one that provides the team with that vital aspect which can ultimately mean glory.

The teams start arriving from Thursday 29 August and setting themselves up for the week end at one of Africa’s most hospitable city’s and with efforts put in to ensure all amenities are catered for, they will be made to feel at home so that they can concentrate on the job at hand, or should we say on the right hand...wide open!

Media will be looked after at the circuit by the Zimbabwe Motocross Event team, as well as the Bogwheelers Club. Media Centre will be at the track with WIFI and a facility to work from for all accredited journalists and photographers.

The event will also be televised, with a post-production being put together by the 2 Wheels TV crew from South Africa, who will put the post production onto DSTV Ignition Channel 189, as well as on You Tube.

Live Stream Commentary will be provided by the SA based Motorsport commentator, Greg Moloney #TheVoiceOfChoice, who will be going live via the Zimbabwe MX Facebook Page and providing not only race commentary but race video, from his mobile phone rig, as he has done at the SA Motocross National Championship since April this year. This format has proven to be very successful in terms of the all, important “Reach” which all sponsors and partners involved are looking for when they speak about things like Return on Investment and future support.

This will not be the only Live Commentary for the event, as Zimbabwe MX have also brought in an ex MXoAN rider and multiple SA and Zimbabwe National Championship rider, Laren Van Der Westhuizen, to work alongside Moloney and provide the fans trackside with his incredible knowledge of the event and the riders too. Van Der Westhuizen and Moloney will also be providing joint wrap-ups and separate summaries via their own Facebook platforms too in order to increase the footprint via social media. In doing this they want to get, as much interaction and engagement on this valuable media platform as possible, and along with what the teams and individual riders put out should have the 2019 FIM Africa MXoAN trending.

For those looking to get to the event, Donnybrook Park is on Arcturus Road in Harare, and race action happens on the Saturday and Sunday respectively (31 August and 1 September 2019).

The 2019 FIM Africa Motocross of African Nations is proudly sponsored and assisted by:

The Voice of Choice

Issued on behalf of Motorsport Zimbabwe