KENNY INTO HIS STRIDE 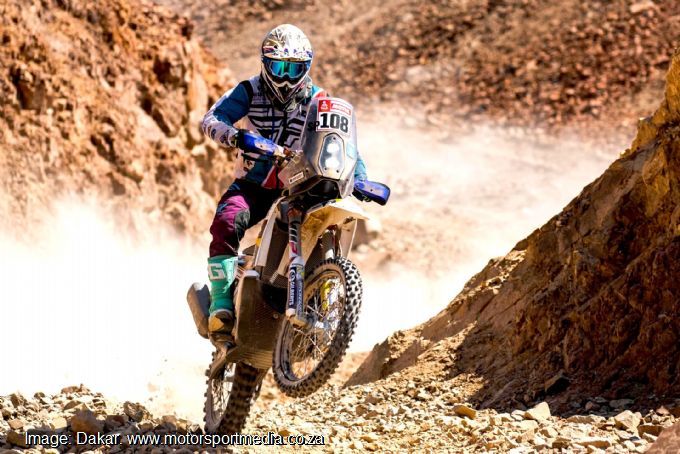 Another good day at the Dakar

South African two-wheel Dakar Star Kenny Gilbert was in his stride through the 2019 Dakar Rally’s 359km Day 8 jaunt over the dunes around the Peruvian town of Pisco. The start was foggy, but the temperature soon rose to 40°C as Pretoria rider Gilbert ran 19th on his Husqvarna early on, ultimately ending the day 23rd overall as he climbed to 21st overall and also moved up a place to third among the rookies.

“Today I just kept it steady, tried not to make any mistakes, got all my waypoints and tried to learn the dunes,” Kenny explained. “These guys are unbelievable in the dunes! “Other than that I had no problems, the bike was flawless and I felt good — the stage started with 160km of fast roads and rocky sections, which I really enjoyed and then it was into the dunes all the way home. “Now we just have two days to go. I’m looking forward to getting this thing over, but I am really enjoying it!”

It was also another good day for the Husqvarna factory team as Chilean Pablo Quintanilla rode in second on the day to move back up to second overall.just a minute off the lead, while American Andrew Short ended fifth on the day to move up to 7th overall. Wednesday's penultimate stage around Pisco is in effect the last chance to make a move as Thursday’s last day to Lima is perhaps too short to make a difference, but sitting where he is, is a top 20 result in the offing for Kenny Gilbert on his debut Dakar…?

Issued on behalf of Husqvarna Off Road