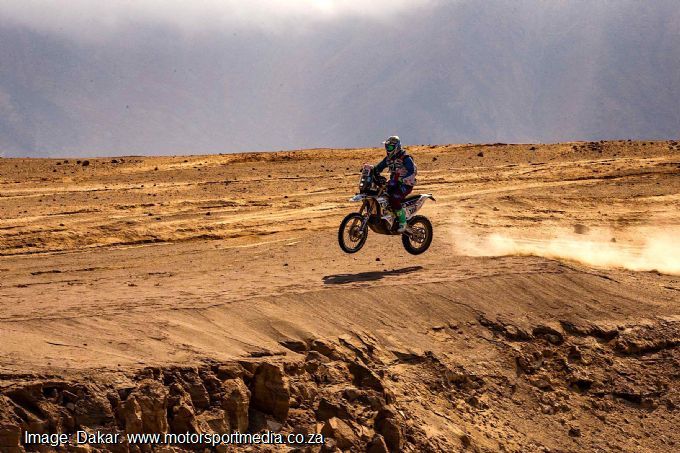 Landmark for Kenny Gilbert on eve of Dakar finish

Pretoria's rookie Dakar motorcycle star Kenny Gilbert moved his Husqvarna to the overall top twenty on Wednesday as the race enters its last day with a 112 final stage to Lima on Thursday. Multiple SA champion Gilbert enjoyed another consistent run over the dunes around Pisco to come home 24th as he moved up to 20th overall and sits second among the rookies.

“Today was a frustrating one,” Kenny admitted. “I am not at my best in the dunes and I struggled a bit today - I dropped the bike, I think it was five times and lost a bunch of time, but when we came out of the sand, I really enjoyed riding those roads and made the most of that lost time up and I was delighted to learn that I am provisionally up to 20th so it’s all worth it. “My body is tired now and I can[t wait for the finish — it’s just 112 more kilos to the finish and then home for a huge rest!

“The Dakar has been quite a sacrifice, but one thing I am sad to have missed was my kids’ first day of school today — I’d loved to have dropped Gordon and Ally off today, but that was just not possible - see you soon guys — I will make up for it, promise!"

The Husqvarna factory team remains right in the overall motorcycle fight too, with Chilean Pablo Quintanilla going into the final day just a minute off the lead, while American Andrew Short ended 8th on the day to jump from 7th to fifth overall. Thursday’s last day to Lima may be a short 112km, but one minute is also a small gap to overcome - should be a grandstand finish!

Issued on behalf of Husqvarna Off Road