DOWN TO THE WIRE 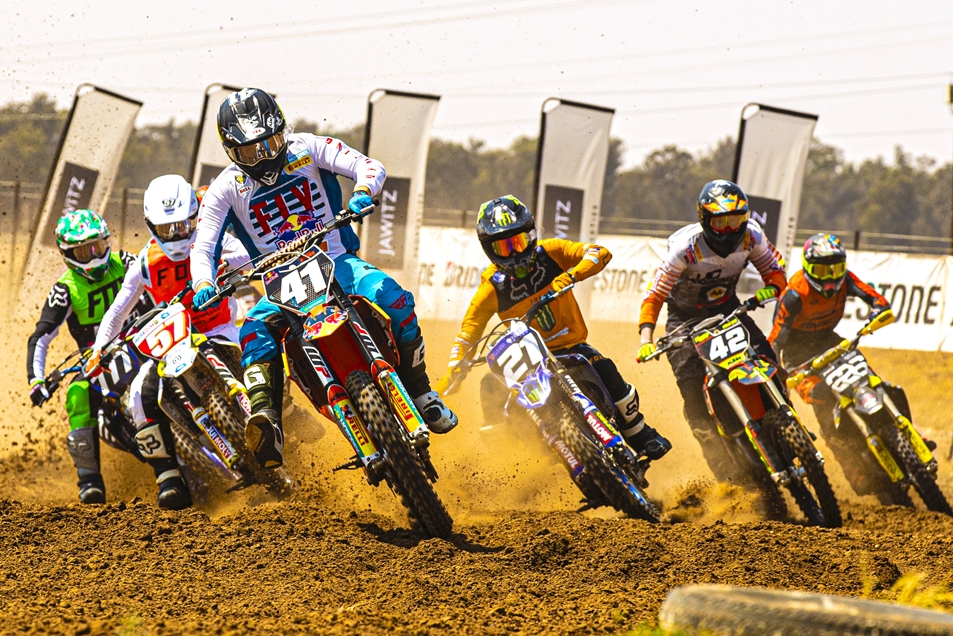 What SA National Motocross Round 6 Report

Most of South Africa’s 2019 TRP National Motocross Championships are still wide open after a day of drama in Welkom on Saturday, where only Dalton Venter was crowned this year’s high school champion. All the other classes must wait until the final round at Terra Topia north of Johannesburg to be resolved on 26 October, with many of them quite literally poised on a knife’s edge.

While international wildcard Camden McLellan (KTM) romped off to two 125cc High School wins, all Dalton Venter (CIT Husqvarna) had to do was follow him home to seal that 2019 SA High School title. Venter’s task was made all that much easier by occasional racers this season, KTM duo Miguel de Waal and Jonathan Mlimi, and Yamaha duo Calvin Jean-Jacques and Christiaan Cilliers all beating Arnu Saaiman (KTM) to seventh, but it was far more complicated in the open classes, where the title lead indeed changed in both MX1 and MX2 over the weekend...

There was also a shake-up in 250cc MX2, where another Red Bull KTM rider Kerim Fitz-Gerald took his winning streak to five in a row with a couple of wins over teammate Joshua Mlimi, while Slade Smith (Husqvarna) beat erstwhile leader Anthony Raynard (Tintswalo Yamaha) to third overall. Bradley Cox (KTM) was fifth from Jesse Wright (Yamaha), Camden McLellan (KTM), Ricky Raaff (Husqvarna) and Johan Vogelsang (KTM) and the upshot of all that is that Fitz-Gerald has moved into a 7-point championship lead over Raynard, with Mlimi just two points further adrift.

There was a surprise in the ladies race, when Natasha Rugani (KTM) became the first rider to beat Kayla Raaff (Husqvarna) this season in the first race, but Raaff was back to her winning ways in race 2. Rugani however did enough to keep her albeit mathematical title hopes alive as KTM sisters Jadene and Cheyenne de Lima took third and fourth on the day ahead of Tiegan Reed (KTM), Jenna Bohling (Husqvarna), Carika Pieterse (Yamaha) and Savannah van Vuuren.

Deegan Bloomfield (Husqvarna) took a win and a second to close his small-wheel 85cc Junior title deficit down to a provisional eight points to Seth Young (KTM), who took the opening win and a third and also set up a titanic title showdown in that class in Jozi next month. Timo Maximo Toepfer (KTM) ended second and third in the heats to keep his championship third intact, with KTM trio Pieter Brink, Nathan Verster and Arno Erasmus next up.

Neil van der Vyver (Q4 Fuels Husqvarna) took another step to tying up his 2019 primary school 65cc title when he shared the Welkom wins with Liam Botha (Husqvarna) as Trey Cox (KTM) and Jordan van Wyk (Husqvarna) shared the thirds and fourths too, to set up a titanic fight for second in that championship chase between van Wyk, Botha and Cox with 11 points between the trio. Damon Garrell (KTM) was fourth in the Free State ahead of Husqvarna duo Jack Pullen (Husqvarna), KTM duo Blade Tilley and Thor Johnson, Damien Venter (Husqvarna) and Tyler Petersen (Yamaha).

So, only one South African national motocross champion has been crowned for 2019, leaving the rest to be decided at an incredible finale at Terra Topia in October. That surely will be a spectacle to behold.

Issued on behalf of SA Motocross